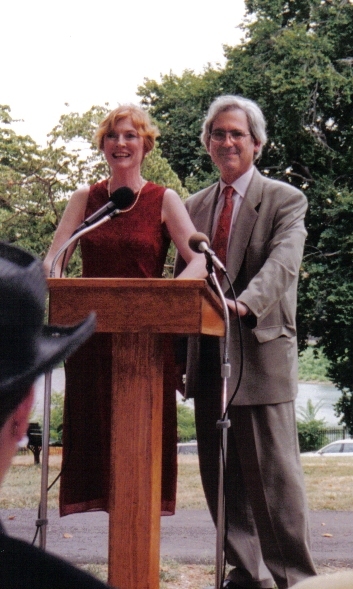 It’s an honor and a joy to dedicate today a memorial in gratitude to the great American poet and educator Eli Siegel, founder of the philosophy Aesthetic Realism. This day, August 16, 2002, has been proclaimed by Mayor Martin O’Malley “Eli Siegel Day” in Baltimore, and by Governor Parris N. Glendening “Eli Siegel Day” in the State of Maryland.  In addition, a citation from Maryland State Senator Joan Carter Conway, and a certificate of special recognition to the Aesthetic Realism Foundation from US Congressman Benjamin L. Cardin have been issued for this historic event.

Mr. Siegel lived, during his youth and early 20’s in Baltimore.  His wife, Martha Baird Siegel, wrote in her Introductory Note to his book Self and World, “He read enormously during his high school years…and often spoke of reading…in Druid Hill Park….” This memorial stands on earth that was loved by him.

I am Carrie Wilson, Consultant on the faculty of the Aesthetic Realism Foundation. It is the honor of my life to have studied with Eli Siegel, and I am very proud to introduce today speakers who will comment on the importance of his lifework in relation to education, the solution to racism, art, economics, and the understanding and success of love and marriage.

First, we want to thank the Interrim Director and staff of the Baltimore Department of Recreation and Parks; Congressman Elijah E. Cummings, whose tribute “Honoring Eli Siegel” was entered a few weeks ago into the Congressional Record of the United States; Congressman Benjamin L. Cardin; State Senator Joan Carter Conway; Mr. Marvin Billups, President of the National Recreation and Park Association; and many other governmental, educational, and community leaders—whose names we’re proud to cite in the program—for their assistance and enthusiastic support. And we are grateful to Alice Bernstein, Aesthetic Realism Associate and journalist, for the initial conception of this memorial and her loving, exact work in having it come to be.

Now, Edward Green, composer and teacher on the faculties of the Manhattan School of Music and the Aesthetic Realism Foundation will join me in reading Mayor O’Malley’s historic Proclamation. 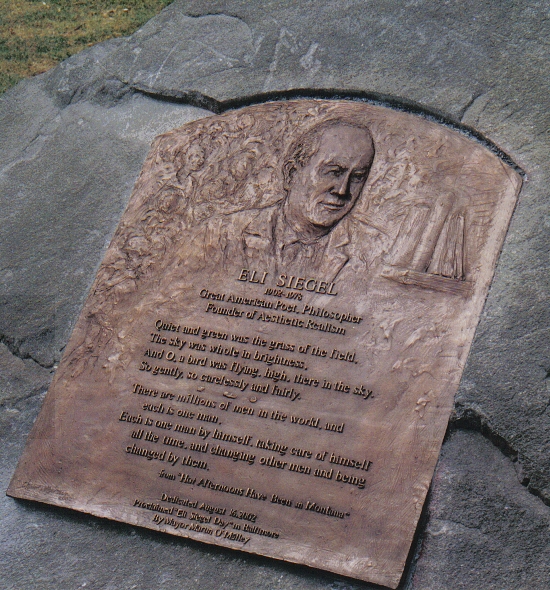 Eli Siegel Day Announced on the Jumbotron in Oriole Park at Camden Yards, 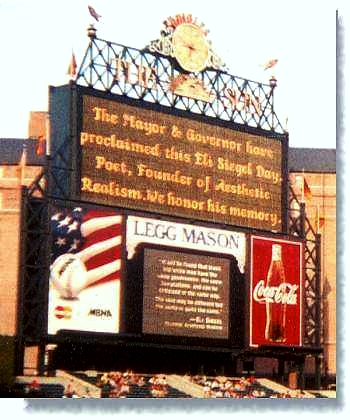 Closeup of jumbotron in Oriole Park

The upper portion of the Jumbotron says:

The Mayor and Governor have proclaimed this Eli Siegel Day. Poet, Founder of Aesthetic Realism. We honor his memory.

Below, the smaller center screen is from the Emmy-award winning public service film “The Heart Knows Better” by Ken Kimmelman, and reads:

“It will be found that black and white man have the same goodnesses, the same temptations, and can be criticized in the same way. The skin may be different, but the aorta is quite the same.“

♦ PROGRAM of the Dedication Ceremony, including the Supporters and Speakers

♦ Brief biographies of the speakers & other participants