LEARNING CAN BE DEFINED as the getting into oneself of the world, with as much variety, as much order, and as much respect as possible. These three things have to be there; because the danger in learning is that we can specialize in a very bad way, and specialism and insanity are two phases of the same thing: insisting that a part of something is the whole thing. So there has to be variety to true learning. There has to be organization, or order. Then, since it can’t be just a gobbling up, there must be some respect—that is, a feeling that it is good for this to be important as a thing in itself, outside of one’s acquisitive desires.

One of the best ways of seeing how important learning is, is to see how, whenever people make a mistake—misspell a word or say that a book was written by that author instead of this author—they are really very perturbed. The fears of people are a way of seeing how deeply learning is wanted by persons. The going after it in a false way, in a feverish way, is witness to how big it is and how necessary it is in a true way. 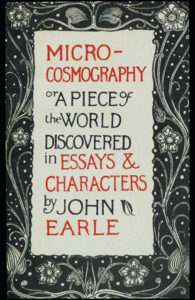 The pretense to learning can sometimes take a very funny form. John Earle wrote a book called Microcosmography, published in 1628, and wrote in this book about a “Pretender to Learning”: “He conceits nothing in learning but the opinion, which he seeks to purchase without it.” When a person wants the reputation for something, it does mean that somewhere he wants the thing itself. He doesn’t want it that much as to get it truly, but he wants to appear as if he had it, which means that he does care for it with a phase of himself. So this person wants the “opinion” of learning—that is, he wants people to think he is learned—and he wants to purchase it without learning.

“He is oftener in his study than at his book, and you cannot pleasure him better than to deprehend him: yet he hears you not till the third knock, and then comes out very angry, as interrupted.” Which means that he likes people, really, to find him in his study where there are lots of books and he can act as if he were very fond of learning, yet when people knock on his door he acts as if he didn’t hear them, and acts as if he were very much annoyed. (“Deprehend him” means come upon him suddenly.)

Just as some people will put books on stands—particularly books that have imposing titles, like The Study of History, or The Meeting of East and West, or A New Concept of Gestalt, or Santayana’s Concept of Essence—and will place those books nicely so that people will get impressions, this person puts a whole folio (which is a big book) on his table. “His table is spread wide with some classic folio, which is as constant to it as the carpet, and hath laid open in the same page this half year.”

“His candle is always a longer sitter-up than himself, and the boast of his window at midnight.” He goes to bed, but his candle is up so that people can think he is studying.

This is an example of an interesting pretense about learning. I have seen it in ever so many forms. But the fact remains that people cannot acknowledge to themselves that they aren’t interested in learning. Learning seen as a manner of getting the world within us in its variety, if possible in its unity, and with respect, and with order—that is difficult and there is a big thing in people against it. Sometimes it makes for learning in one field with a hate of learning in another; and that is bad, because it is that specialism which is next door to division or insanity.

However, there has been a great deal of comedy which says that no matter how much a person is learned, he can be unlucky or foolish. The question is, What does it mean to be learned? If you avoid having the world as it is in you, you are not learned; you simply have all kinds of notions about the world which are not the same as the world itself; your learning is a lot of terminology without what the terminology should stand for. Many things that have looked like learning have seemed to slow up people, but in all instances it wasn’t the real thing. 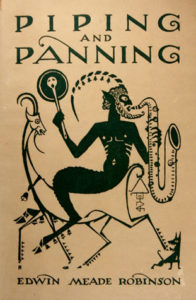 In the America after the First World War there was a disposition to make fun of learning—as there has been all the time. A columnist for the Cleveland Plain Dealer, Edwin Meade Robinson, answered those carpers at learning who showed what happens to all the college youths who do so well in their studies—they usually go to taverns or come to New York and get lost. I read “How He Turned Out,” from Piping and Panning (1920). Robinson is one of the best metrists in America. I’m not enthusiastic about its strict poetic value. “When he was young, his parents saw (as parents by the million see) / That Rollo had an intellect of quite unequaled brilliancy.”

“At ten he knew astronomy and differential calculus.” We see in this lightsome verse the varieties of learning. A person can look very closely at a few letters on a page, and also look at the planets; then there is differential calculus, which shows that figures, quantities, have a mobile relationship, a strange relationship, which can be dealt with logically. “And at eleven could dissect the tiniest animalculus.”

“Music he learned—the old and sweet, the up-to-date and hideous.” Anytime you are learning something, you want to take something from the exterior world and somehow change it into yourself. Learning is a changing of something into yourself.

“At last, with learning that would set an ordinary head agog, / His education far outshone his most proficient pedagog.” The best thing about learning is that it is associated with brightness. Though seemingly learned people have been mopes and drips and dull, we always talk of a person who is really learned as shining. We say that a child who wants to learn is “bright”; a mind can be “shining,” “brilliant.” That is the best tribute, because it shows that learning stands for life, that the desire to learn is the desire for life.

By this time many things had been written showing that learning didn’t get you anywhere, so you might as well be a bootlegger: “This man (it’s hard on humor, for it breaks the well known laws of it!) / Was happier for his learning, and a great success because of it!” In this deft way, we have a continuation of the doctrine in Proverbs: wisdom pays, learning pays; so you’d better get in on it—putting it bluntly.