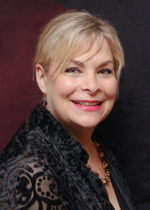 What Kind of Effect on Men?
by Lauren Phillips

This article arises from a paper Ms. Phillips, a New York City elementary school teacher, presented at a public seminar titled “Can a Woman Be Proud of Her Effect on Men?”

Early in my study of Aesthetic Realism, at a time when I was not hopeful about love, I was asked in a consultation, “Do you want a man to feel, ‘The mind of Lauren Phillips does me good’?” I was surprised; and the answer was yes. But for most of my life before that, it was not the accuracy of my mind I depended on with men; it was the ability to have an immediate effect through the way I looked. Once, while talking to several attractive men, I decided to make a dramatic exit. As I walked away, I glanced over my shoulder to observe the effect I was having and walked right into a large glass door. Luckily, the only thing bruised was my vanity.

Though I was driven by the desire to dazzle men, I didn’t respect myself for it. At 21, attending acting school in New York, I wrote in my journal, “I want to use acting to make the world a better place.” But when it came to men, I had a very different purpose, and every relationship ended painfully. “What do I have to offer a man?” I asked myself. “Well, at least I can make him laugh and I have my body.”

I learned from Aesthetic Realism that the one way a woman can be proud of her effect on a man is by using him to know and like the world and by doing all she can to encourage him to see reality and people fairly. The reason I was so ashamed was that I used men to have a contemptuous victory over the world—to feel I’d conquered it. When I saw that a man was stirred up by me, I didn’t respect him more. I reduced his meaning to a handsome face and a satisfying body. And increasingly I felt doomed to be a failure in love.

In my second Aesthetic Realism consultation, I spoke about Mark, a man I’d been seeing. I told my consultants I was so furious that I wanted to throw something at him. They surprised me by asking, “Do you think you’ve gotten Mark pretty mixed up?” I was confused by men, but the idea that I could confuse a man hadn’t occurred to me. As they asked me to think about what Mark felt, I became irritated and restless, and replied, “I have no idea what he’s thinking.”

Consultants. Do you think Mark feels you’ve shown yourself as you really are or you’ve presented some picture of yourself?
LP. A picture of myself.
Consultants. Do you want to look in a way you’re sure a man will have to notice?
LP. Yes.
Consultants. The question is, do you like yourself for how you do it? There’s nothing wrong with affecting men with how one looks; but what would be the difference between a woman’s respecting herself for the way she affects a man and not respecting herself?

They gave the criterion—in this question: “Have you wanted Mark to be weaker or stronger through you?” I answered, “I think I want him stronger, but then as we talk I find I want to affect him with my body.” My consultants explained, “So you give him two messages: you’ll say useful things in conversation, but as soon as body gets in, you want him to be weaker. Do you think that’s enough to muddle him a good deal?”

To See a Man Widely

I learned that how we see the first people we meet affects the way we’ll see people we meet later, including men. As the only girl and the only blond in the family, I got a good deal of approval. And my father, Arthur Phillips, and I went for long walks together, complaining about my mother and my two brothers, and commiserating with each other. Without knowing it, I was doing something very hurtful: backing up my father’s feeling that the world had hurt him, and trying to have him think nobody was as warm or interested in him as I was, including his wife. What he was hoping for or concerned about, as to his work, as to my mother, never crossed my mind. I was to continue this selfish, weakening purpose with other men.

My consultants once asked whether, as I went after my father’s praise, I made less of my “deepest desire, to know another person and use him to like the world.” They continued, “You need to see your father with respect and width and not as a possession.” To encourage me to do so, they gave me assignments: for instance, to write a soliloquy of Arthur Phillips, trying to show what he feels to himself. I was asked to think about him as an actor would think in trying to understand a character in a play. As I really thought about who my father was, what he was hoping for as a lawyer, husband, friend, parent, I felt I was meeting him for the first time.

Through my study of Aesthetic Realism, as I read works by such men as Shakespeare, Dickens, Molière, Henry James, Walt Whitman, Sir Walter Scott, I began to see with some amazement and great pleasure that men weren’t put on earth to praise me: they had selves with insides that were interesting, various, deep, and alive. I learned too that a man’s biggest hope is to like the world, to feel he can have a good effect on people. For the first time, I had pride in thinking about men. And I began to feel hopeful about love.

How Much Are We Affected?

I had not known that I was unable to be truly affected by a man because of my excessive interest in the big effect I wanted to have on him. For example, in college I met Tom Sheridan, the first man with whom I had a long-term relationship. Even though I felt more for him than I had for anyone before, when an old boyfriend wanted to visit me, I explained to Tom why I couldn’t see him—Tom—for the weekend. Though my mother told me I was being very unkind, I was determined.

Meanwhile, that weekend I had a terrible headache and felt miserable. I’ll never forget seeing Tom on Monday, and his speaking to me about how much I had hurt him. I felt ashamed, but I didn’t know how to be different. Increasingly I had less feeling for the men I dated, and was careless about whom I was close with.

I felt enormously relieved when, a few years later, my consultants explained: “You don’t believe a good effect is possible because it hasn’t been what you’ve gone after in your affecting people. Two values are really in a showdown in you. You have a sense that it’s possible to be with a man in a way you respect yourself for—to have a man feel that the world looks better to him, more sensible, through you. In the meantime, there’s been pain, self-dislike; and there’s also been a pleasure in just being able to have a powerful effect and not show yourself truly or honestly.”

I was learning to think about a man in terms of who he is, what he is hoping for. I was learning to have good will, which Mr. Siegel has described as “the desire to have something else stronger and more beautiful, for this desire makes oneself stronger and more beautiful” (TRO 121). Aesthetic Realism shows that good will is an urgent, beautiful need in every person’s life. And I’ve learned that whatever the situation, whoever the person, it is the one thing that can have a woman proud of her effect on men.

When I met Bruce Blaustein, I had a new feeling: that I could show my depths to a man instead of pretending. I liked his energy and the thoughtful way he was interested in people. He too was studying Aesthetic Realism, and as we spoke, I had the thrill of seeing that a man wanted me to be more honest, stronger. I felt two things I’d never felt before: I was swept to my core by a man, and I had respect for him—and the combination was something!

My consultants gave me assignments—such as to write about “Opposites in Mr. Blaustein and the World” and “What Does It Mean to Be Close to a Person and Have More Respect for the World?” I felt a dignity and pride I had never before experienced. I had never realized that sex and love could be a subject of education, wide and cultural.

I cherish my marriage to Bruce Blaustein, who is an Aesthetic Realism consultant and whom I love more deeply and passionately with every year.  That I can feel my mind and body have a good effect on my husband, makes for such pride.

Aesthetic Realism can enable people to feel truly proud of how we affect each other. The study of how to have a good effect on another person is new in culture, and there is nothing more important or pleasurable for men and women to know.