Aesthetic Realism Explains the Cause of America’s Housing Crisis & the Solution!

“I feel passionately that when people learn to see other human beings as having insides, hopes, feelings as real as their own, homelessness will be a thing of the past. And I want people to know what is in these sentences from Self and World by Eli Siegel: ‘The world should be owned by the people living in it….All persons should be seen as living in a world truly theirs.'”  —Ken Kimmelman, Emmy Award-winning filmmaker

They tell what they’ve seen through their study of Aesthetic Realism, the education founded by the American philosopher and poet Eli Siegel, about the cause of the housing crisis in America—the contempt at the basis of our economic system—how it begins in every person, and how it can change. 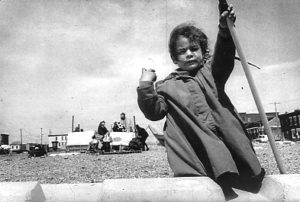 What Does a Person Deserve? —

Shown in this presentation is the award-winning public service film against homelessness and hunger produced by Ken Kimmelman, What Does a Person Deserve? based on statements by Eli Siegel, including these sentences from his book Self and World: “The world should be owned by the people living in it.…All persons should be seen as living in a world truly theirs.”

Housing is a basic human right, and should not be a means of profit for landlords and developers.

America can have good housing for everyone!