Having organized many workers and studied labor history, I have seen that Eli Siegel understood what other economists and historians have not. He explained that the central matter in economics is ETHICAL: the fight throughout history is not the class struggle; it’s the fight between respect for people and contempt for people. 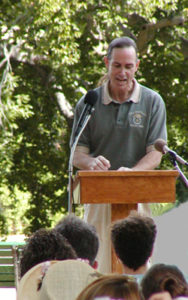 Mr. Siegel showed that the desire for contempt — to make oneself more by lessening someone else — is the only reason why there is poverty in this world. Contempt is what has a person see another in terms of money for oneself — not in terms of who that other person is and what he or she deserves. I’ve seen many people who were maimed or diseased because of the contempt which Mr. Siegel showed is at the basis of profit economics. I know men whose fingers were severed on table saws because the boss didn’t want the flow of profit slowed down by safety mechanisms. I know workers whose lungs are damaged from years of inhaling dust because employers didn’t want to lose profit by remedying the hazardous conditions. Mr. Siegel was clear early, here in Baltimore, and all his life: jobs should be for usefulness, not for profit.

In many lectures he gave, he showed that unions have been one of the biggest opponents to contempt and forces for respect in world history, because unions have insisted, with power and often beautiful rudeness: These are people, not mechanisms for someone’s profit! A statement I love and believe needs to be known by everyone is this, from a 1970 lecture by Mr. Siegel:

The most important thing in industry is the person who does the industry, which is the worker. That … can never change. Labor is the only source of wealth. There is no other source, except land, the raw material …. Every bit of capital that exists was made by labor, just as everything that is consumed is.

In that year, 1970, Mr. Siegel explained that we have reached a point in history at which economics based on using people contemptuously, for profit, no longer works. Good will has to be the basis of production and distribution for our economy to be efficient and kind. A poem he wrote here in Baltimore when he was 20 years old has in it his tremendous feeling for people, and his hatred for a way of economics that has crippled their lives. He uses the phrase “stupid masses” ironically. Maybe he saw a little girl like the one he tells about, in this park:

A little child of seven years,

Innocent as little children are,

Though very poor, she has no fears

Now that she may not go

As any other child.

Among the “stupid masses,”

This one of millions,

May strike as a showily attired

Working where cigars are made,

May lose in the strike and be fired,

May of hard work be very tired,

May even for her body be desired,

And not so very humanly.

Because of Mr. Siegel’s conviction and clarity about justice, people come to feel that being just to others is the same thing as having a great time and taking care of yourself! I’ve seen this—and it’s the most hopeful news in the world.