What I Wanted to Show 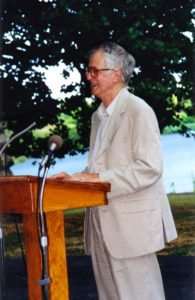 I am tremendously moved and honored to have designed and sculpted this memorial to Eli Siegel with whom I began to study as a young artist in November 1940. I want this bronze, which I first modeled in clay, to add to the true knowing and celebrating the grandeur and depth of his mind and utter good will in how he saw all people, including myself.

My idea began with a simple pencil sketch of a plaque mounted on a rock. I wanted a combination of a sense of earth and the permanence of truth. I wanted the plaque to have a classical shape, dignified and also warm, a rectangle with a curve on top. I centered Mr. Siegel’s head above his great lines from “Hot Afternoons.”

On his right, I wanted, through the low relief of many figures, to give a sense of the humanity he so magnificently understood and was fair to; and on his left, to symbolize his unparalleled love of scholarship and books. 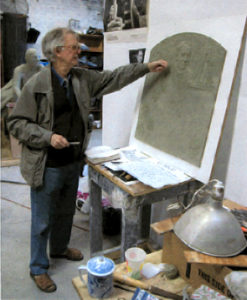 I looked at photographs of Mr. Siegel, taken over the years, as I knew and remembered him. Modeling his noble forehead, his face, sculpting his cheek, I wanted to get within his deepest self, to show his honest eyes, his mouth, his ears, and have him made tangible and lovingly real.

As I sculpted Mr. Siegel’s mouth, I wanted his lips to show his honesty, sincerity, sweetness, charm, fierce love of truth, humor, and that he had the same purpose talking to a child and speaking on Kant’s Critique of Pure Reason.

It is a pleasure with this memorial to join the people of the city of Baltimore in honoring Eli Siegel, great poet, critic, and more than ever needed teacher of America and the world.