Reproduced here is the printed program given to the people who attended the Dedication of the Eli Siegel Memorial on August 16, 2002. The program included an address by Ellen Reiss and others speaking about Eli Siegel. They are also presented online. 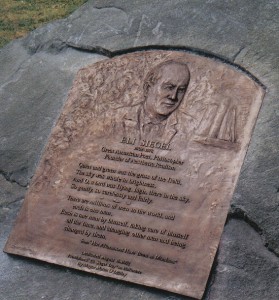 Persons of the Department of Recreation & Parks who assisted in the coming to be of this memorial:

The bronze memorial plaque was cast at the New Foundry New York.

VI. “SOMETHING ELSE SHOULD DIE:
A POEM WITH RHYMES,” by Eli Siegel
Read by LaVerne Fields

Kimberley M. Amprey, Interim Director of the Dept. of Recreation and Parks, was formerly an analyst in Mayor O’Malley’s CitiStat office.

Margot Carpenter,* originally of Miami, is a poet and, along with teaching Aesthetic Realism in consultations and seminars, she is Executive Director of the Aesthetic Realism Foundation. Published on love and women’s issues, she is also an authority on dance and was a soloist with the Miami Ballet.

Edward Green is a composer and teaches on the faculties of Manhattan School of Music and the Aesthetic Realism Foundation. He recently spoke on Aesthetic Realism and the music of Duke Ellington at Baltimore’s Eubie Blake National Jazz Institute. In September a work of his will be premiered at the Kennedy Center in Washington, DC, by Prism Brass and saxophonist Dale Underwood.

Chaim Koppelman,* designer of the Eli Siegel Memorial, began his study with Eli Siegel in 1940. He is on the faculties of the School of Visual Arts and the Aesthetic Realism Foundation. His prints are in the collections of the Museum of Modern Art, Metropolitan Museum of Art, Los Angeles County Museum, Victoria and Albert Museum in London, Guggenheim Museum, Philadelphia Museum of Art, the National Gallery, and others. He is a member of the National Academy of esign.

Dorothy Koppelman* began her study of Aesthetic Realism with Eli Siegel in 1942. She founded the Terrain Gallery in 1955, with exhibitions based on this principle stated by Mr. Siegel: “In reality opposites are one; art shows this.” Mrs. Koppelman conducts “Critical Inquiry: A Workshop for Visual Artists” at the Aesthetic Realism Foundation. Her work has been shown in museums throughout the country, and is in the collections of Hampton University, VA, and the National Museum
of Women in the Arts, Washington, DC.

Timothy Lynch is President and Principal Officer of Teamsters Local 1205 in New York, and an Aesthetic Realism Associate. He has been interviewed on radio and TV, and been published on Aesthetic Realism and economics in major newspapers, including the Los Angeles Times, the Wall Street Journal, the Star-Ledger of New Jersey, as well as in many union periodicals.

Derek Mali,* actor, has taught Aesthetic Realism for over 30 years, giving consultations and presenting seminars on such subjects as “Justice & Comfort: What’s the Relation?,” “How Much Should a Man Care For—Besides Himself?,” “Do We Know What’s Best in Us?—& What’s Worst?”

Lois Mason* is an instructor of the workshop for educators “The Aesthetic Realism of Eli Siegel As Teaching Method.” A public school teacher since 1971, she currently teaches US history at New Utrecht HS in Brooklyn. She has written articles, and spoken at professional conferences, on the Aesthetic Realism Method
in teaching social studies.

Allan Michael is a Maritime Captain and photographer. On September 11, 2001, working for Circle Line Tours, he ferried people from New York safely to New Jersey. His photographic work has been exhibited at the Terrain Gallery, NYC, and the Craven Gallery’s “Emerging African-American Artists” show in Martha’s Vineyard, was part of the traveling exhibition “Art Against Apartheid,” and has appeared in Essence magazine. Mr. Michael is published on the subject of how Aesthetic Realism can end racism.

Monique Michael was born in Port-au-Prince, Haiti, from which her family fled in 1965 to escape the brutal Duvalier dictatorship. She has been an elementary school educator for the past 10 years, and has written articles and conducted workshops at educational conferences describing the success of the Aesthetic Realism Teaching Method.

Robert Murphy* has written and spoken on Aesthetic Realism’s understanding of such diverse subjects as economics, love, and the cause of and solution to youth violence. With Barbara Allen,* he teaches young people in the “Learning to Like the World” class at the Aesthetic Realism Foundation and in classes at youth centers throughout New York.

Arnold Perey, Ph.D.,* teaches the course “Aesthetic Realism and Anthropology” and is an instructor of “The Aesthetic Realism of Eli Siegel As Teaching Method.” He received his doctorate in anthropology from Columbia University; and his dissertation, based on Aesthetic Realism, describes research conducted in Papua New Guinea, supported by the National Science Foundation. He taught at the City University of New York and Seton Hall University, and his articles include “A New
Perspective for American Anthropology: The Philosophy of Aesthetic Realism” and “The Real Opposition to Racism.”

Rosemary Plumstead* is an instructor of “The Aesthetic Realism of Eli Siegel As Teaching Method.” She teaches science at Fiorello LaGuardia HS of the Arts in New York City, and has been published extensively on educational issues. She has conducted workshops at conferences for science educators in New York, New Jersey,
North Carolina, Pennsylvania, and Maryland.

The Prism Brass Quintet, founded at the Eastman School of Music, is the graduate brass quintet-in-residence at the University of Maryland, College Park. They were on the faculty of the 2002 Tanglewood Institute of Boston University. (They are joined today for the playing of Weber’s “Konzertstück” by flutist Barbara Allen.)

Ellen Reiss* is the Class Chairman of Aesthetic Realism, appointed by Eli Siegel. She teaches the professional classes for Aesthetic Realism Consultants and Associates. A poet and critic, she also teaches the course “The Aesthetic Realism Explanation of Poetry” at the Foundation. Prior to becoming Class Chairman in 1977, she taught in the English departments of Hunter College and Queens College of the City University of New York. As Editor of the international periodical
The Right of Aesthetic Realism to Be Known, her commentaries on world events, literature, history, and the human self have been educating people worldwide. She is considered by many people the foremost educator in the world today.

Jaime Torres, DPM, is Chief of Podiatry at Coler-Goldwater Memorial Hospital in New York, and an Aesthetic Realism Associate. He is on the advisory boards of The National Hispanic Medical Association and the National Diabetes Education Program. His articles on healthcare have been published in Spanish and English newspapers and professional journals. With Dr. Perey, he spoke at the Campus Outreach Opportunity League’s National Conference at Harvard University, on Aesthetic Realism and how prejudice can end.

Carrie Wilson,* actress and singer, teaches the Aesthetic Realism class “The Art of Singing: Technique and Feeling.” Originally of Philadelphia, she is also an art historian. A coordinator of the Terrain Gallery, she has lectured on the Aesthetic Realism explanation of art and life and on works by such artists as Renoir,
Botticelli, and Rembrandt.

Back to “Eli Siegel Day Celebration”