On Eli Siegel in Baltimore

I’m tremendously happy to join the people of Baltimore in celebrating Eli Siegel, whom I love, with whom I studied for many years, and whose understanding of humanity the world needs so much. I’ll speak a little about his thought and writing in the years he lived in this city. They contain the basis of the philosophy he would found later, and stand for who he was. 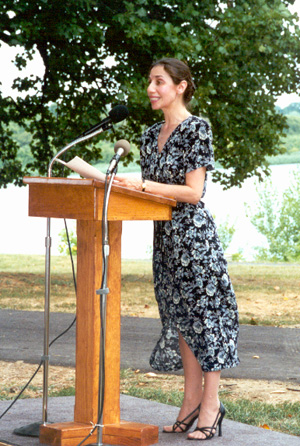 The constant, propelling desire in Mr. Siegel then and always was to know: to see truly things, people, the world itself; to be exact about them. In his 1923 essay “The Scientific Criticism,” written in Baltimore, published in the Modern Quarterly, he wrote: “Man should know that there are no limits to his mind …. Only a part of him has been used …. Man’s mind was made to know everything.” The sincerity of his desire to know made him 1) the greatest of scholars; and 2) passionate that justice come to people — including economic justice.

To give just a slight indication of his love of knowledge, I quote from a very early document, written when he was in high school, at Baltimore City College. This is from a letter to his friend A.D. Emmart. Eli Siegel, a month before his 16th birthday, writes about just having finished reading all the works of Shakespeare. And then he writes:

“At last! At last! Finally! Finally! I have bought some books. Not a great deal of money expended, it is true, but some. I don’t have to get the best editions of the poets, deluxe, morocco, illustrations …. In fact, I prefer old editions to new. The books I have bought are an edition of Shakespeare and a Goldsmith. The sums that I paid are very, very small. The Shakespeare is an old Globe of 1866, but good enough to be read …. If I can … get my share of shekels, I’ll buy an eighteenth century edition … and like Macaulay, make comments on the margin. That is all of Utopia in this life that I want.”

Years later, teaching Aesthetic Realism, Mr. Siegel made knowledge — literature, history, all the arts and sciences — warm and alive for people. More, I believe, than anyone else who lived, he encouraged people, including me, to love knowledge.

In a 1944 article in the Baltimore Sun, Donald Kirkley wrote this about Mr. Siegel’s purpose 20 years earlier:

“He thought ‘all knowledge was connected — that geology was connected with music, and poetry with chemistry, and history with sports.’ … He wished to find … some principle, unifying all the various manifestations of reality.”

Eli Siegel found that principle, and it is the basis of Aesthetic Realism: “The world, art, and self explain each other: each is the aesthetic oneness of opposites.”

Now I read a short poem he wrote here in Baltimore in 1922. It’s about the hope to know things exactly — which is what he means by the word “objectively.” It’s called “A Man in a Far Countree.” It’s about him:

There was a man in a far countree

And he saw things objectively.

And he was as merry as he could be,

Considering the state of this far countree.

This says what Mr. Siegel taught and lived always: that seeing things justly makes one happy.

While still a young man, Eli Siegel expressed with logic and passion something it’s urgent for people to see now: that every person, past or present, is as real as oneself is. In a 1923 Baltimore essay published in the Modern Quarterly and titled “The Middle Ages, Say,” he writes:

“There were people who lived in the Middle Ages and, who, so, suffered and enjoyed; the one difference between us and them is that their pains and pleasures are over and ours are not. These people are our fellowmen over the years.”

He saw that all the cruelty in the world came from persons’ making others less real than themselves. He saw in Baltimore what later he saw elsewhere — that people were robbed of what they deserved, because what should belong to all people was owned by just a few. He hated this, and fought against it early and all his life with the greatest eloquence and greatest feeling. I quote him at age 20; from the Modern Quarterly:

“Mind needs nourishment, care and training all by itself …. And … millions and millions of people from the beginning of the world … have not got this mind’s nourishment, care and training. Their lives were forced to be led so, to get food enough for their stomachs, was all that they could do …. Now if nobody made the land, it is evident, to a really normal human, that everybody living has a right to own it and should own it.”

I’m going to read now another poem, written in 1923, when he lived in this city. It’s called “Trees in Rain.” And it has in it something he would teach in Aesthetic Realism: that each of us is related to the whole world; we have reality’s opposites. Therefore this is not a world we should try to get away from or have contempt for. In this poem, the way a girl has gone from triumph to feeling low is like the way trees can be: soaring, yet dripping in rain:

“Trees in Rain” by Eli Siegel

The sky is grey with mist;

Dark in mist is the sky;

Much rain has fallen,

And this is why

The leaves of the trees drip

And now a girl walks;

Her feet crashing against the wet grass;

And she’s in grief.

Now it pains her;

And there was a time

When bright it was

The wet green of the leaves

Now after rain has fallen

And the sky is grey and dark.

I love this poem. The musical justice to the girl in it is a prelude to something new in history: Mr. Siegel’s deep, wide comprehension of a person in Aesthetic Realism lessons. I am a person who was understood to my core, magnificently by him. And now, in Aesthetic Realism consultations, because of the principles he came to, this new understanding of people continues.

Beginning in Baltimore, Mr. Siegel caused enormous love and respect in people. But he was also met with anger, because he had so much knowledge and was completely honest. People in established positions, and others, were furious they had so much to learn from him and couldn’t feel superior to him. Therefore this memorial celebration stands for ethics and the future of America, because it says: We’re proud to respect what’s honest and great; we’re proud to honor Eli Siegel!