For centuries there have been people of science and thought who wrote against racism. As an anthropologist I have read many, including the great Montesquieu. But no one understood the CAUSE of that vicious thing — until Eli Siegel did. He himself was completely without prejudice. And, as I know personally and professionally, the education he founded enables racism within a person to end! 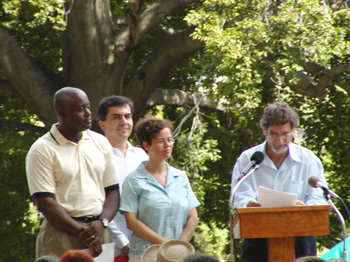 He explained that prejudice and racism — responsible for such horrors — don’t begin with an attitude to people of different skin color. They begin with the ordinary contempt people have day by day for what is different from oneself: the “disposition in every person to think he will be for himself by making less of the outside world.”

From the first class I attended with him, Eli Siegel taught me what no professor ever had, or could. Looking at me with the kindest, keenest eyes I had ever seen, he asked, “Are you more interested in being better than other people or as good as you can be?” And he was to ask if I felt superior to the people I had lived with and studied in New Guinea. Yes, I had.

I had often criticized racism in others. But for all my study of culture in Africa, the Amazon, India, the Pacific — like so many other social scientists who saw themselves as liberal — I myself still had prejudices and scorn that no university education ever took away. Mr. Siegel taught me their cause: he wrote, “As soon as we see that other human beings are placed differently from ourselves, contempt does what it can to include them.” I have studied hundreds of cultures, and in every one I have seen how contempt has impelled people without their being able to identify it or combat it. And when a person’s contempt is criticized — as the philosophy Eli Siegel founded makes possible — prejudice ends.

Mr. Siegel taught me to see how people of skin tones different from mine have the same feelings I do and deserve the same respect and dignity. He was great. And part of his greatness was to enable racism to change from inside out: in the human heart and mind.

I was born in Port-au-Prince, Haiti. I am of both African and European ancestry. In Aesthetic Realism and in Eli Siegel I found the knowledge and the person who understood the cause of all racial prejudice and were completely against it. I also met the education that made sense of and ended the painful confusion I felt about my mixed ancestry. As Dr. Perey said, Mr. Siegel identified the seed of all prejudice as contempt. 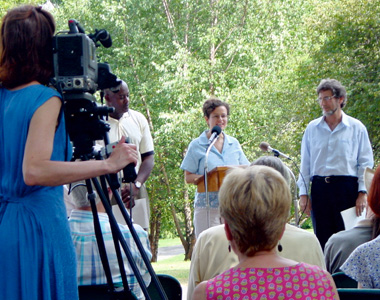 Monique Michael speaks on how racism can end

My family moved to America in the early 1960s into an all white neighborhood, where we were seen with suspicion because we looked different. While this prejudice had a bad effect on us, I did not know that the scornful way I myself saw people who were different from me was also unjust and hurt me very much.

Early in my life I got the message that being white was far superior to being black. For instance, I was told that I should not marry a black man because we had to become lighter rather than darker as the generations went on. For most of my life I felt I was better than anyone who was darker skinned and poorer than my family.

When I learned from Aesthetic Realism what Mr. Siegel showed about contempt, I felt deeply understood and so relieved. It explained the prejudice I had been met with and also my own injustice. I saw that it was my desire to look down on people that made me nervous around them. It also made me unable to value my African ancestry. In The Right of Aesthetic Realism to Be Known, Ellen Reiss writes:

For racism to end, … what is necessary is the seeing and feeling that the relation of sameness and difference between ourselves and [another] person is beautiful. People need to feel … that difference of race is like the difference to be found in music: two notes are different, but they … complete each other; each needs the other to be expressed richly, to be fully itself.

As I saw that I am related to all people, that we are the same and different, I began to be proud of being both African and European — and to think about all people justly.

Eli Siegel’s understanding of the cause of racism is one of his many great contributions to humanity. When studied worldwide — and my life is evidence for this — it will make honest kindness and respect alive in the hearts and minds of all people, and will make the world safe and civilized. 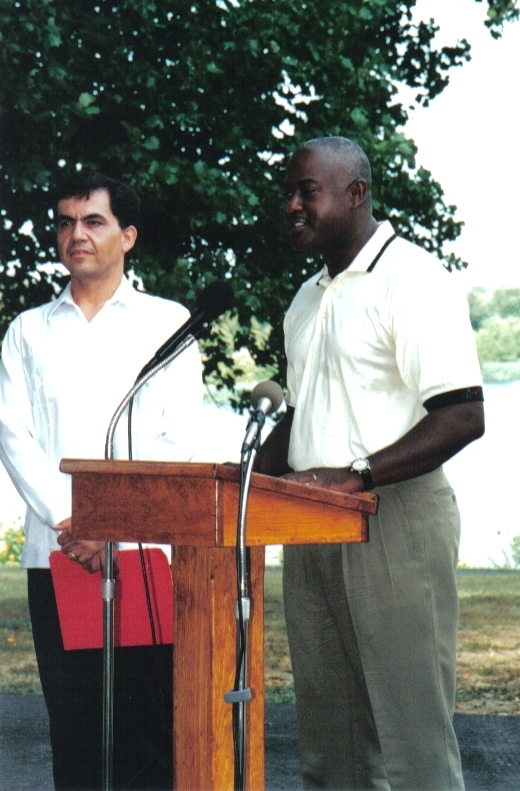 It is hard to be black in this country and feel that justice is going to come your way, because black people have endured horrific injustice for years, from slavery to racial profiling. This has made for tremendous anger in our nation. For example, I was angry and humiliated being stopped on Route 80 by a state trooper for no apparent reason, as my private belongings were systematically strewn out on the roadside.

I join my wife, Monique, and fellow speakers in saying I know that Aesthetic Realism is the means to end racism. In fact, the Aesthetic Realism education is living proof that through what Mr. Siegel explained, people of one background not only can be fair to others, but can understand them. It was through the thought of Eli Siegel, a white man, that I was able to understand the deepest things in myself; and this points to a fundamental hope for all races.

It will be found that black and white man have the same goodnesses, the same temptations, and can be criticized in the same way. The skin may be different, but the aorta is quite the same.

Humanity will thank him as I do for teaching in Aesthetic Realism how all people can honestly see each other with depth, kindness, and respect.

When I came to New York from Puerto Rico to study at Fordham University in the 1970s, I was outraged by the daily discrimination blacks and Puerto Ricans endured. I was denied housing, told I was admitted to college because of a quota, and discriminated against because of my accent.

But my sense of outrage was not enough to change my own prejudice and how I saw other people, whom I often judged by their skin tone, the texture of their hair, and how little or much money they had. Contemptuously, I gave myself the right to see anyone as I pleased, but also felt disgusted and painfully lonely.

Today I stand here as a person representing millions of Hispanics, saying, Gracias, Eli Siegel, for understanding that the fundamental cause of prejudice and racism is the human desire for contempt.

Contempt, I learned, is behind every act of discrimination — from the way I refused to join clubs in college that had African-Americans and New York-born Puerto Ricans, to the horrors of lynching, the beatings, racial profiling. I thank God I met the kind thought of Eli Siegel in Aesthetic Realism consultations and heard criticism of my contempt that changed my prejudice.

I learned that trying to know and be fair to someone different from me is the same as my self-expression, pleasure, and pride. It is an emergency in this country that we like the way we see other people. Tolerance by itself will never do, because it doesn’t satisfy what every person wants most: to feel that through whatever and whomever we meet, we can like the world and ourselves more