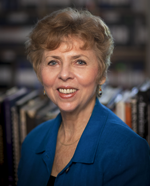 MARCIA RACKOW, artist and consultant, teaches the museum/gallery course “The Visual Arts & the Opposites,” previously taught at Hofstra University, “The Art of Drawing: Surface & Depth,” and is one of the teachers of the “Critical Inquiry: A Workshop in the Visual Arts.” She was a guest speaker at the Pennsylvania Academy of Fine Arts in Philadelphia, the School of Visual Arts in New York City in the “Artists Talk on Art” series, the Balanced Mind Conference, and at New York State Art Teachers conferences. At the 31st World Congress of the International Society for Education through Art, she presented with Dr. Arnold Perey, the talk “Aesthetic Realism, Art, & Anthropology; or, Justice to People,” published in International Conversations through Art. At the Barnard College MAC Lecture series she gave a talk titled: “I Thought I Knew Art, But…”

She is a contributor to the exhibition catalog “Napoleon Entering New York: Chaim Koppelman and the Emperor,” published by the Museo Napoleonico in Rome, 2011. Her articles and reviews have been published in newspapers and art journals, including in the Journal of the Print World—on subjects such as, “Is Art Really and Urgently about Life?: The Drawings of Leonardo da Vinci;” “The Joyous Drama of Outline and Color: ‘Icarus’ by Henri Matisse,” and “‘Wonder and Matter-of-Fact’ Meet; or, The Imagination of Beatrix Potter.”

Ms. Rackow studied Aesthetic Realism with its founder, Eli Siegel, and now studies in classes taught by the Aesthetic Realism Chairman of Education, Ellen Reiss. She is a graduate of Barnard College, where she received a dual degree in French Literature and Art History. She studied painting at the San Francisco Art Institute, the Colorado Springs Fine Arts Center, and lived and worked in Europe for several years, studying painting in Paris, Rome, and Florence. She exhibits at the Atlantic Gallery in Chelsea, New York City.

In public seminars at the Foundation, Ms. Rackow has spoken on the lives and work of many artists, including David Smith, Henri Matisse, Titian, Claude Monet, Frank Stella, Sonia Delaunay, Berthe Morisot, Edouard Manet, Antoine Watteau, Suzanne Valadon, Artemisia Gentileschi, Leonardo da Vinci, and Kathe Kollwitz. She is a coordinator of the Terrain Gallery, and has curated and arranged exhibitions there, including the “50th Anniversary Exhibition!”