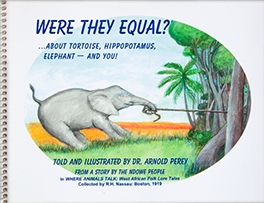 An anti-prejudice book for children, from a traditional story of the Ndowe People of Africa

The story, retold & illustrated by the author, begins:

“Elephant and Hippopotamus were chatting one day, and Elephant said, ‘Have you heard, that little tortoise has been saying he’s equal to us! What nerve!’

Said Hippopotamus, ‘Who, that pipsqueak? My foot is bigger than he is! And he’s saying he’s our equal?’ He was angry. 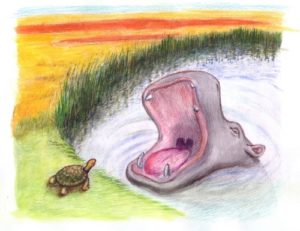 “This story comes from the feeling in people that having contempt for other people, like Hippopotamus and Elephant do, is wrong….I learned that every one of us…can think that we’re big stuff when we make less of other people. And this is the cause of prejudice between races, religions, and even between neighborhoods or families. So when Tortoise teaches Hippo and Elephant a lesson, we should learn from it too! Prejudice, says Aesthetic Realism, arises from contempt for what’s different from yourself.” —Arnold Perey