The People of Clarendon County 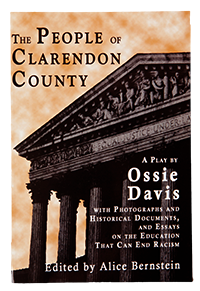 A Play by Ossie Davis & Essays on the Education That Can End Racism.
Edited by Alice Bernstein

Ruby Dee writes: “It moved my husband to think that fifty years later, school children might learn about history by reading or acting in his play. In addition, Alice Bernstein’s book will also inform people about the success of the Aesthetic Realism Teaching Method in enabling children to learn every subject, and ending prejudice in the classroom.”

“The People of Clarendon County is a short play by Ossie Davis….[about] a pivotal, little known chapter of civil rights history. We meet the Reverend Joseph DeLaine and other courageous African American parents in South Carolina, in their fight in the 1950s against racial inequality in education. They risked their lives to file the first legal challenge to segregation in the public schools…later combined with other cases as Brown v. Board of Education….The play had been performed just once, in 1955 at Local 1199’s Bread and Roses Cultural Project in New York City. The young actors were Ossie Davis, Ruby Dee, and Sidney Poitier.” —Third World Press