A groundbreaking after-school program for youngsters ages 6-13 has been taking place in New York State youth centers for over six years. They are taught by Barbara Allen and Robert Murphy through one of the community outreach programs of the not-for-profit Aesthetic Realism Foundation. They encourage children to love reading and other subjects, and to be kinder. Directors at these centers applaud the beneficial effect of this program on the youngsters they serve.

Barbara Allen, a former public school teacher, is an instructor of biweekly workshops for educators on the Aesthetic Realism Teaching Method. Robert Murphy has given consultations to youths for three decades. Together they teach the Learning to Like the World class for children at the Aesthetic Realism Foundation.

Youth center director B. Samuels wrote: “From my first meeting with Ms. Allen and Mr. Murphy, I wanted them to teach all the children who come to this Center. And I’m very glad they have. They are dedicated professionals who believe in what they do…making them great role models for the kids. Our young people respond to and benefit from what Aesthetic Realism teaches. I’ve seen that when the children leave their class, they are always more cheerful and happier, and that makes [me] very gratified! They’re more at ease and also kinder.”

The classes are based on these principles stated by poet and educator Eli Siegel, founder of Aesthetic Realism: “One, Every person’s deepest desire is to like the world honestly. Two, The one way to like the world honestly, not as a conquest of one’s own, is to see the world as the aesthetic oneness of opposites. Three, The greatest danger or temptation of a person is to get a false importance or glory from the lessening of things not oneself; which lessening is Contempt.”

Here is a brief account of one class for African-American and Latino 6- and 7-year-olds, which I observed at a youth center in Harlem.

How Should We See the World and Other People?

Previously the teachers had discussed the big question: How should we see this world we are in?, and told the children what Eli Siegel explained: “The world is all that which begins where your fingertips end.” Said Ms. Allen, “Your deepest desire, and everyone’s, is to like the world with all the facts present.” The children learned about the fight in every person between wanting to respect the world and people, and wanting to have contempt for them. They also learned that the more they welcome knowing the world—in the form of words, sounds, memories—the stronger and bigger their minds will be.

In this class, the teachers showed a film which the children loved: Brushstrokes, an animated anti-prejudice film which Emmy Award-winning filmmaker and Aesthetic Realism consultant Ken Kimmelman made for the United Nations. The central character is a green brushstroke who pals around only with other green brushstrokes and tries to bully and intimidate blue and yellow dancing squares, a pink ellipse, and other wonderful shapes and colors. Then after various adventures he finds his place on a huge canvas which is, as one child called out with delight, “The whole wide world!”

Many children wanted to comment. Sheila said, “He was acting like the other colors hurt him, but he was hurting them.” “They were happy,” said another child, “and he was mean.” “Do you think the green brushstroke was angry with things different from itself?” asked Ms. Allen. “When you’re in the playground with your best friend, and somebody comes up and asks, ‘Can I play with you?’ what do you say? If you say, ‘No,’ is that like the green brushstroke? It had a very bad anger because it didn’t want to like other things that were different from itself.”

The Children Learn: There Are Two Kinds of Anger

The teachers talked about how easy it is to feel the world is mean or phony or unfair and that we should get back at it. Mr. Murphy said, “We know it is not easy to like the world, because often bad things happen in it—things that can make you cry. We would like you to think about a question asked by Aesthetic Realism: No matter how confusing and painful things are, do we have to do all we can to like the world, or we will weaken ourselves?” 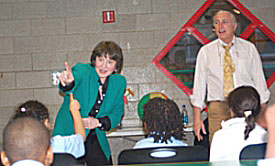 “We saw that the green brushstroke had a bad anger,” Ms. Allen said. “But we’ve learned that there’s another kind of anger—a good kind, which is in behalf of justice to people.”

The youngsters then learned about Dr. Martin Luther King, Jr. and the Children’s Crusade, based on the book for young people Marching to Freedom, by Joyce Milton. “Dr. King,” the teachers said, “was a very important person because of the way he was angry. When he was a young man, he had just won an essay contest. He and his teacher were on their way home on a bus. There were no more seats left and the bus driver yelled at them to get up. The young Martin Luther King said ‘No,’ but his teacher said, ‘If you don’t say yes, we might wind up in jail.’ He did get up, and the book quotes him as saying later, ‘That night will never leave my memory. It was the angriest I have ever been in my life.’”

“That wasn’t nice that people had to do those things,” said Michael. “Yes, it was mean and unjust,” said Robert Murphy. And Barbara Allen continued, “We apologize that this is the way so many people were treated, and it still has to change much more. Meanwhile, the question is: Did the young boy Martin Luther King, Jr. use what happened to hate everything, to say the world’s no good and I should get revenge?” The children said right away, “No!”

What followed was a re-enactment of events in the Children’s Crusade, which I’ll report as a little play.

Robert Murphy: We’re now in Birmingham, Alabama in 1963. There were many men and women who were protesting against segregation. They were being put in jail and were losing their jobs. They couldn’t support their families. At this time, a call went out for high school and college students to come and march for freedom. As they gathered and they marched through the streets of Birmingham, the children in the schools—children your age—were so happy to see them, they climbed out of the windows to join them!

“Wow,” many of these youngsters said.

Robert Murphy: Soon a thousand people of all ages were walking down the street. They came around the corner and there’s Sheriff Bull Connor and his men lined up with billy clubs, dogs, and fire hoses. Bull Connor shouted angrily, “What do you want?”

And Bull Connor said, “Let ’em have it, boys.” And terrible things happened—many were hit by water from fire hoses, chased by police dogs, and even hit over the head with a club.

“But something new happened,” said the teachers. “There were television and news cameras capturing these events, and America saw something very ugly—the racism that was going on, and people everywhere were shocked and outraged that human beings—even children—were being treated this way.”

“Yeeeees!” was the loud reply. “Some of them,” she said, “got put into jail and had to stay overnight. When they got out, do you think they wanted to go home and forget the whole thing or to do more?” The room was very quiet. The children didn’t know. “I’d be scared,” whispered a girl.

Barbara Allen: They said, “No, we’re going to march again.” And they did! Do you want to march like the Birmingham children?

“I do,” one girl said. “Me, too,” said others. And they rushed to line up behind Ms. Allen and began marching in the classroom.

Mr. Murphy told them, “Each of you represents not just yourself but many, many, many other people.” It was very moving to see these children marching, clapping, and singing together “We Shall Overcome.” Suddenly, they are stopped by Bull Connor, played by Mr. Murphy, who again shouts furiously, “What do you want?”

Spontaneously the children replied, “Freedom! Freedom!” Then they all knelt down as the Birmingham children had done those many years ago. Bull Connor says, “Let ’em have it, boys!” But this time, Mr. Murphy told them, all these men, big guys with dogs, stood there and did nothing—not one man moved. The children rose, and marched through the barriers.

“A thousand children,” said Mr. Murphy, “changed America. And that change is not finished yet. We all have a lot of work to do, to make sure that all people have justice come to them, including economic justice. It’s not right that some people don’t have enough money and some people have so much money.”

Concluding this moving class, the teachers asked, “Children, do you think this was a beautiful anger?”  “Yes,” many said.  “What can we learn from this?  We’ve seen that our purpose in everything we do should be to like the world honestly, and whatever anger we have, we should try to have for that purpose—to be kind, to be just.”

I feel there is nothing more important for any person of any age to learn.