Hot Afternoons Have Been in Montana: Poems 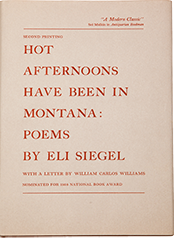 By Eli Siegel
With a Letter by William Carlos Williams

“He comes up with poems…which say more (and more movingly) about here and now than any contemporary poems I have read…”  —Selden Rodman, Saturday Review

The title poem won the 1925 Nation Poetry Prize and, recorded by the poet, is the basis for the 2005 award-winning film by Ken Kimmelman.

Over 130 poems, including: “Ralph Isham, 1753 and Later”; “To Dylan Thomas”; “Put Zebras by the Mississippi”; “Dear Birds, Tell This to Mothers”; “The World of the Unwashed Dish”; “Night in 1242”; “She’s Crazy and It Means Something”; “‘Tis Loveliness, Sir”; “Twenty-one Distichs about Children”; “Kaddish (Words Having Holiness)” [from the Hebrew]. Also has notes by the author on many individual poems.