A painting that has large meaning in my life is Soap Bubbles by Jean-Baptiste-Siméon Chardin. In my second Aesthetic Realism consultation, when I was 18, I saw very tangibly through it the importance of Eli Siegel’s statement: “All beauty is a making one of opposites, and the making one of opposites is what we are going after in ourselves.” 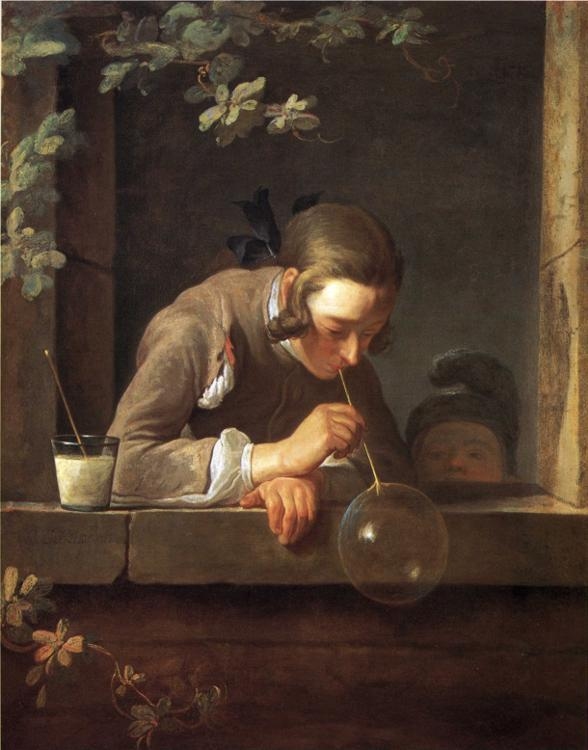 I learned how heaviness and lightness, the moment and what is lasting, are beautifully one in this painting, and that these opposites could be better composed in my life.  I began to feel the whole world had meaning when I saw that opposites I felt torn apart by—and had used to feel the world didn’t make sense—were the same opposites that, seen as one, make for beauty.

I grew up in a resort town on a lake in Michigan, feeling that the main purpose of life was recreational. Eli Siegel asked me years later in an Aesthetic Realism class, “Did you want to cultivate the happy surfaces of things?” I had. I felt this was the only way to deal with the pain I saw early in life, including the separation of my parents and a car accident which left my father paralyzed before he died. I felt I was the brightest thing in the lives of my grandparents, with whom I lived. But what I cultivated from the age of five tormented me as a young woman. I prided myself on gaily living for the moment, but I remember looking into a mirror and bursting into tears because my cheerful exterior was so different from the heaviness I felt inside. I thought no one would ever see how I felt, and that I couldn’t change.

My Aesthetic Realism consultants did see what I felt inside, and explained that the way I was light came from trying to get away from a world I scorned.  I learned that my deepest hope, like every person’s, is to like the world through seeing meaning in it—not laugh off what I thought was unendurable. My consultants so kindly explained to me that my “lightness” was really contempt for the world, and this was the reason I felt so heavy inside. All art, I began to learn, is light and heavy once and is opposed to contempt. My consultants asked me to read question eleven about “Heaviness and Lightness” from Eli Siegel’s 15 Questions, Is Beauty the Making One of Opposites?

“HEAVINESS AND LIGHTNESS.  Is there in all art, and quite clearly in sculpture, the presence of what makes for lightness, release, gaiety—and is there the presence, too, of what makes for stability, solidity, seriousness?—is the state of mind making for art both heavier and lighter than that which is customary?”

My consultants asked me, “Do you think if seriousness and gaiety are one in a painting, they can be one in you?”  I said, “I’m not sure.”  My heart was beating fast with the hope that it might be true, and when they showed me this painting, Chardin’s Soap Bubbles, I felt as I looked at it that heaviness and lightness could be more composed in myself because of the beautiful way they are in this painting.

The first thing I was affected by is the sobriety of the brown, earthy colors; they give the painting solidity and weight.  I liked the seriousness of the young man’s face. The consultants asked: “What is this man being serious about?” I was surprised by the answer: a soap bubble!

Consultants: “That bubble is ever so transient.  It will be gone in a second. Are absence and presence–opposites like those in the bubble—large opposites in your life?”

I had built a case against the world–using the death of my father, the uncertainty of people—to justify my not caring too deeply for anything or anyone because I felt “nothing lasts.”  I didn’t see the moments of my life as having anything to do with the permanent meaning of reality—in fact, I didn’t think there was any permanent meaning in reality.  But the French painter, Jean-Baptiste-Siméon Chardin, who lived from 1699 to 1779, is known today because he showed the structure of reality as a whole in scenes from everyday life.

The Transient and the Permanent

Soap Bubbles was painted about 1734. It has been seen as an allegory for the transient nature of life. I believe Chardin wanted to see the relation between the moment and the permanent, to show that the transience of life is not against its meaning. What we see lasted a few seconds, but Chardin shows that this moment has within it the eternal structure of the world—the oneness of opposites; and that is why this moment has lasted over 285 years! 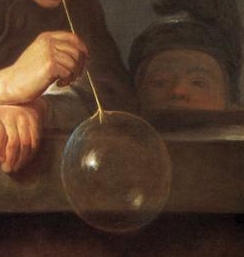 Chardin’s placing of the bubble is beautiful. The lightest, most delicate thing in the painting is placed low, which it gives it weight and brings lightness to everything above the bubble.  The soft, round bubble is in front of the hardest, weightiest, most permanent thing in the painting—the horizontal stone ledge, and through the transparent bubble, we see the lasting stone-the ledge which supports the whole composition. And it is so surprising that the break in the stone ledge on the lower left and the bubble on the lower right—two things standing for reality as broken or fleeting—form the base of the solid pyramid shape made by the ledge and the boy blowing the bubble.

Chardin’s showing that the transitory has permanent structure is tremendously important for our lives. In an Aesthetic Realism class, Eli Siegel so deeply understood the emptiness I felt because of the way I used “the broken and fleeting” not to see meaning.  He asked me, “Do you believe your life has any meaning? In order to feel you have value in the world, what must come first?” And he explained: “Seeing relation is the one basis of art, of poetry, and it’s the one thing that makes a person important.” Studying Aesthetic Realism has shown me the world has meaning beyond what I ever imagined.  I learned that there is nothing in the world we aren’t related to.

The Artist Looks for Relation

I was thrilled to see how Chardin shows relation in this painting through form.  It is a beautiful composition of circles and triangles. The head of the young man is circular, and at the other end of the straw he is blowing through, is the round bubble.  A little boy is behind the ledge watching the bubble intently—and his head is about the same size as the bubble.  Our eyes follow a large curve from the glass at the left of the painting to the top of the young man’s head, to the boy watching the bubble, to the bubble itself. But within the roundness of this composition, there are points and angles. There is a triangle of light on the man’s arm, just below the little finger of the hand that holds the straw. The young man’s nose is a triangle of light; there is a sharp angle formed by the crook of his arm holding the straw; and he himself forms a triangle from the base of his two elbows to the top of his head. Without these angles, all those gentle curves would be too soft, and not deeply true to the opposites in reality.  But because there are these angles, we feel the sharpness of things included honestly in the large roundness, and it is deeply composing. 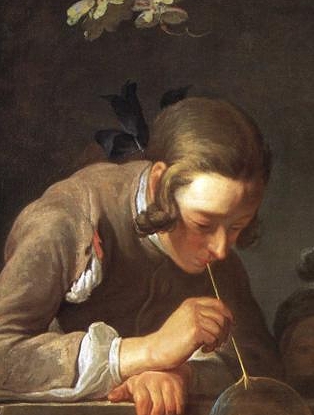 Also opposing the soft round forms is the rip in the young man’s jacket—with bright white and red colors spilling out, the rip is so different from the containedness of the bubble that is makes us feel its perfection even more.  Without the rip we would feel something too contained, too orderly, and even superficial.

This painting answers soberly and joyously “yes” to the most serious questions we can ask: Does the world have meaning? Do our lives have meaning? Light and dark, the weighty and feathery, the permanent and the transient are related beautifully and shown to be one in a way every person is longing for and can learn from, as I am so grateful to be through the Aesthetic Realism of Eli Siegel.