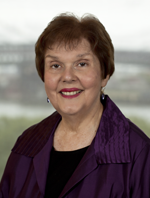 MIRIAM MONDLIN: An expert on stuttering and how it can end, Consultant Miriam Mondlin is the author of the landmark article “How My Stuttering Ended,” which was given as part of a public seminar at the Aesthetic Realism Foundation titled “What Interferes with Your True Expression?”

In it, she tells what she learned from Eli Siegel and Aesthetic Realism about the cause of this impediment and describes the scientific process that ended her stuttering. Listed in guides to the best stuttering websites, she has been published on the highly-regarded “Stuttering Homepage” of Minnesota State University, and in newspapers such as The Rock Island Argus. In 2011, her article about the film, “The King’s Speech & An Approach to Stuttering,” was published online on The Indian Stammering Association website in February, and in May, two of her articles, including “Genes and ‘Something Else'” were published in their quarterly newsletter, Samvad.

She began her study in classes with Eli Siegel in 1952, where she learned that to understand the cause of stuttering in the widest sense includes a deeper understanding of many other things, including economics, the arts, and the family. Eli Siegel named her an Aesthetic Realism consultant with the teaching trio The Three Representatives in 1972.

Early in her life, growing up during the Great Depression and World War II, she saw racial injustice and experienced economic injustice, and wanted to fight for people’s rights. Through her study, she learned the cause of the injustices she saw first hand: the desire for contempt—”the lessening of what is different from oneself as a means of self-increase as one sees it,” as Eli Siegel explained. This knowledge has strengthened her conviction about what people deserve everywhere in the world.

For many years she worked as a staff member of Local 23-25 of the International Ladies’ Garment Workers’ Union (now Workers United, SEIU). Local 23-25 is the local that represented garment workers from the early 1900s in the sweatshops of New York City. “It needs to be seen,” she writes, “that unions are vital to the well-being of Americans. They are central in getting people decent wages, health care, job security, safer working conditions. I have seen that when unions are strong, working people are much better off. I continue to be a union activist.” Mrs. Mondlin is one of the administrators of the blog “Unions Matter!”

Over the years, Ms. Mondlin’s early care for art has flourished. She studied at the Art Students League and elsewhere. At the Aesthetic Realism Foundation, she studies in the class “The Art of Drawing: Surface & Depth,” taught first by the late Chaim Koppelman, and now by Marcia Rackow. Her work has been shown at the Terrain Gallery, and in a Group Show at the Atlantic Gallery, NYC. She studies in the Critical Inquiry, conducted by artist and Consultant Dorothy Koppelman. Read her gallery talk “Can We Be Expansive & Contained Like Van Gogh’s ‘Starry Night’?”

Articles by Miriam Mondlin about the fundamental rights of people have been published on her website: Aesthetic Realism & Self-Expression, including: