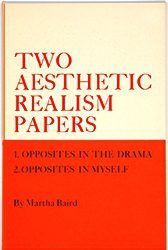 “The reason people love the theatre, or poetry or music or any art, is that these are the highpoints of success in what we all want: to see the contradictions in ourselves and in the world as making sense.” –Martha Baird

“In this book, there is that rare thing, honesty. When Martha Baird writes of the drama—Aeschylus, Terence, Hamlet in Moscow, Garrick, Beckett, and even Clurman, Watts and Kerr—you feel the drama, it; the critics, them. Simultaneously, because of the abiding opposites, and the author’s lucid, spare, and sunny style, you see her mind, her thought….Martha Baird describes her first Aesthetic Realism lessons with Eli Siegel. She tells of learning about lightness and heaviness in herself, about sincerity and pretense, contempt and respect. And she tells of how she learned for the first time what poetry was really about.” —Definition Press

“Martha Baird (1921-1981) was a poet, editor, author, and musicologist. Born in Dodge City, Kansas….after working for WGN radio in Chicago, Baird moved to New York, where she joined the American Guild of Variety Artists and studied Aesthetic Realism with founder Eli Siegel, whom she later married….Baird published a book of poems, Nice Deity (1955), as well as the radio plays The Inside and Outside of Winnington Snail and The Comma That Didn’t Belong Anywhere, which was adapted for the screen in 2009 [Thomas Comma, an animated film by Emmy award-winning filmmaker Ken Kimmelman].” —poetryfoundation.org