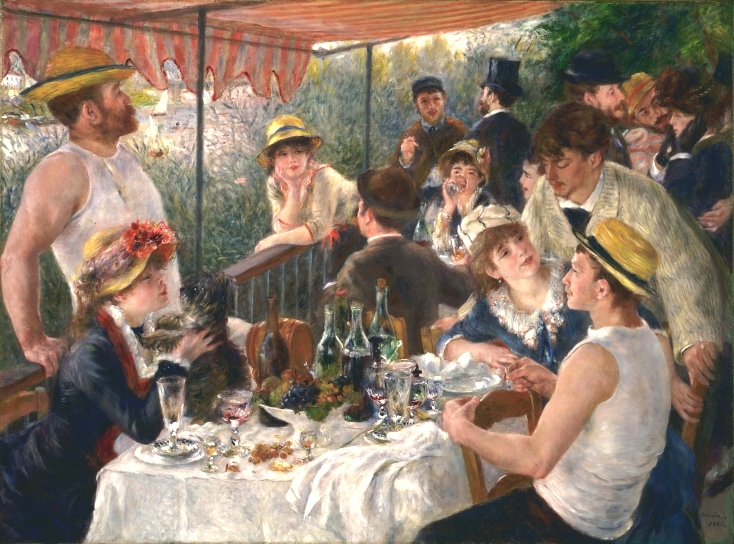 What Can Art Teach Us About Love?: Renoir’s Luncheon of the Boating Party

Every woman wants to feel proud of the way she sees a man. Every woman wants to feel that love is beautiful in the same way that she can feel, looking at a painting, “This is beautiful!” But we haven’t known what would make us able to. Eli Siegel, in answering the question “What is beauty?,” has made it possible for us to know. “All beauty,” he stated, “is a making one of opposites, and the making one of opposites is what we are going after in ourselves.”

In an Aesthetic Realism class when I was 25, Mr. Siegel asked me, “Do you believe you know how to love?” I answered, “No.” He explained, “To love is to feel the loveliness and superior loveliness of something else in a way that makes us triumph.” This feeling, I’ve learned, is both the essential emotion in true love and the emotion that makes for art. I think it is what Pierre-Auguste Renoir felt as he painted this large, radiant canvas, The Luncheon of the Boating Party, in 1881, and it is something we all can learn from.

Every true work of art comes from the desire to know and respect the world. The trouble in love comes when we use another person to be superior to what we see as a mundane, interfering world. We try to get to sweeping feeling by putting the facts aside. Renoir doesn’t make this mistake; he makes opposites beautifully one.

I. Logic and Emotion in a Painting and in Love

In a class early in my study of Aesthetic Realism, Mr. Siegel asked me:

Do you believe the dazzling time that will dissolve your questions is what you’re looking for? A period of intensity will drown all the questions you have—isn’t that right?

That is what I had gone by, and it made me unable to respect myself—because I was unfair to another person, whom I was using to get away from the world and triumph over it. Without realizing it, I was having contempt for the world I deeply wanted to like.

Mr. Siegel explained what I was truly hoping for when he asked, “Can intellect ratify ecstasy? Do you know how much it is possible?” I didn’t, and I thank Aesthetic Realism for teaching that when we really care for someone, that care has knowledge and sound reason as its basis. That intellect can ratify ecstasy is one of the large things art can teach us about love.

In his historic 15 Questions, “Is Beauty the Making One of Opposites?,” Eli Siegel asks about Logic and Emotion:

Is there a logic to be found in every painting and in every work of art, a design pleasurably acceptable to the intelligence, details gathered unerringly, in a coherent, rounded arrangement?—and is there that which moves a person, stirs him in no confined way, pervades him with the serenity and discontent of reality, brings emotion to him and causes it to be in him?

The Luncheon of the Boating Party—now in the Phillips Collection in Washington, DC—has moved people happily to tears; it did me. This canvas, over four feet high and nearly seven feet wide, is dazzling, even ecstatic. What we are first affected by is its warmth, its manyness, its shimmering light and dark, and fresh, glowing color. We see many people, seated at tables and standing on the canopied balcony of a restaurant overlooking the River Seine. It seems casual; we believe we could have come upon a scene like this, as it is. Yet as we look, we find there is a wonderful structure here, a structure both symmetrical and unsymmetrical, which “pervades” us “with the serenity and discontent of reality.”

For example, the painting is divided vertically into four equal sections—the two verticals supporting the awning, and another vertical that begins at the top with the dark green trees and goes down through the elbow of the man seated below. That is symmetry. Included in the two left sections are only three people and one dog. And on the right are all the rest. That is asymmetry. However, there is interweaving. Light is in the heavy sections on the right—in the table cloth, a white shirt, that lovely pale yellow jacket, glimpses of collars and cuffs, a bit of sky. And dark color gives weight to the light sections, as does the downward slope of the waving and geometric canopy. There are dazzle and logic both, and the oneness of the two is what makes this painting great.

II. The Third Partner in Love

One way that logic and emotion can fight in love is: a couple can give themselves a symmetry that doesn’t go along with what they really feel. Two people can be in a smooth team, apparently approving of each other, while keeping their criticism to themselves. But as we have told women in Aesthetic Realism consultations, no woman can really love a man who isn’t a critic of her for where she is unfair to the world and other people, and no woman loves a man unless she is a critic of him, and wants him to meet his own best hopes. We have to make an honest oneness of serenity and discontent, as Renoir does in this painting.

One way he does this is by organizing these figures into groupings of threes—sometimes interlocking threes. Three, as a number, is a oneness of odd and even (1 plus 2), asymmetry and symmetry. In the chapter “Love and Reality” in his book Self and World, Eli Siegel writes; “there is…a third partner to the relation of Edith and Jim. That partner is the world as a whole.” It is notable that in this whole painting of men and women enjoying themselves on a summer day together, there are no twosomes. One way or another, we find Renoir has a third partner. And every group of three is a relation of intimacy and width.

For instance, on the left a woman sits, affectionately holding a little dog, and behind them stands a man in a white shirt, looking into the distance. His white-clad body rises out of the other two figures. On the right, another man, also in a white shirt and also wearing a yellow straw hat, completes a triangle with the first man and woman. 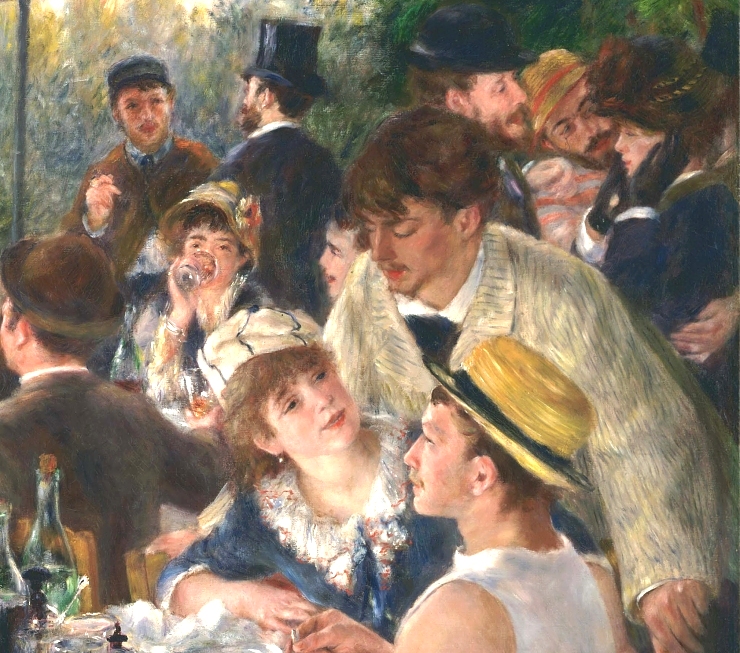 Meanwhile, he is part of another group of three. He and the woman seated next to him, whose gaze is a lovely mingling of meltingness and inquiry, are encircled by the outstretched arms of the man standing behind them, leaning on two chairs. Behind them at the right of the canvas, a man stands with his hand at the waist of a woman, who shows her uncertainty by holding onto her hat, while another man rests his hand on the first man’s shoulder.

The whole painting has this motif of threes. This is part of Renoir’s “design pleasurably acceptable to the intelligence”; seeing this design, the painting stirs us more, pervades us “with the serenity and discontent of reality.”

It moved me to see that the center, the axis securing the whole composition, is the man in brown. Unlike myself, who wanted to use a dazzling time to dissolve my questions, Renoir has placed, right in the center of this dazzling painting, a man with his back to us, representing the world as unknown—and what’s more, he paints him a sober, earthy brown. And see how the two diagonals which cross at his back hold all these figures together.

This man is Baron Raoul Barbier, who organized this boating party so that Renoir would have a chance to paint it. Renoir here keeps his organizing function. He shows his gratitude through form. And I believe that Renoir was also saying something here about the central importance of honoring what we don’t know, “the world as the third partner,” mysterious yet friendly.

III. A Person and the World

I learned that the purpose of love is to use a person to like the world as a whole. One of the great mistakes people make is to separate feeling about one person from feeling for all people. To make a composition of many people you know, and to see a relation among them that brings out the meaning of each, which Renoir does here, is what is necessary in love.

The girl Renoir loved and was to marry, Aline Charigot, takes her place with all the others and represents an emotion about humanity and the world as a whole. She is part of “a design pleasurably acceptable to the intelligence.” She is the young woman seated on the left, holding the dog. With Renoir’s friend, the painter Gustave Caillebotte, who is seated on the right, she is placed nearest to us, and to the artist as he painted, and helps to stabilize the composition. 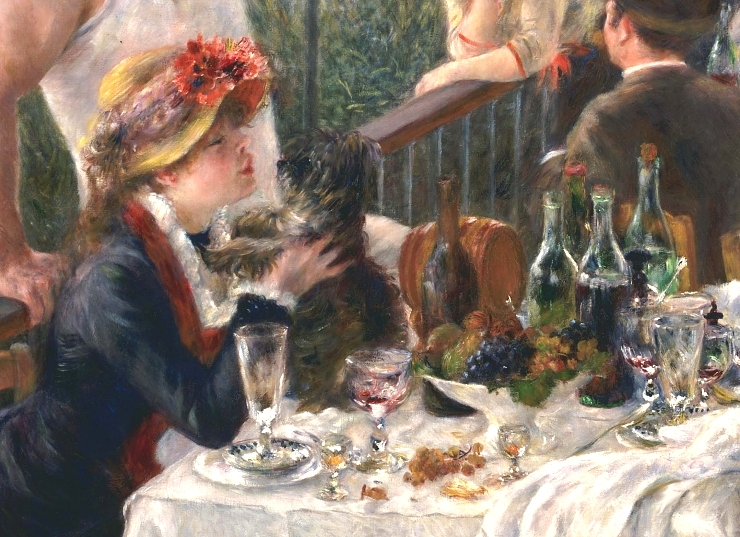 To see a person truly in relation to the world, Aesthetic Realism teaches, we have to see how the world’s opposites are in that person. Renoir shows Aline Charigot as a relation of affection and profile, ruffle and elbow, dark and bright, intensity and gentleness. The red on the bodice of her dress stirs and satisfies, but in the way it is blended with darker tones there is something uncertain. As she sits there quietly, it runs like a current, defining her form.

Through color, qualities, and composition, she is related to everything else in the painting. We see this logically, and our feeling for her is greater. Is she less for being dressed in dark purplish blue and capped in red like the wine bottles? No, she is more through relation, and she makes everything else more too. In Self and World Eli Siegel wrote:

A self can say to another being, “Through what you do and what you are and what you can do, I can come to be more I, more me, more myself; and I can see the immeasurable being of things more wonderfully of me, for me, and therefore sharply and magnificently kind and akin.”

Renoir, I think, says that here. And he says it of every object in the painting. This is the logic of the emotion every person wants to have.

A talk from the Terrain Gallery’s historic series: Aesthetic Realism Shows How Art Answers the Questions of Your Life!
Click here to go to TerrainGallery.org website