Four Essays on the Art of the Print 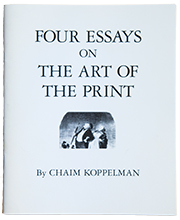 “This is a masterpiece. These essays literally opened my eyes….I think it should be used in every art appreciation course.” –Roy Meador, co-author Book Row

“Pablo Picasso is seen as the most powerful artist of the 20th century, and also as one of the most tender and compassionate. In his etchings of the 1930s the bull, and later beings from Greek mythology which are half animal and half man, appear with increasing frequency….All these beings represent the duality in Picasso: the opposing forces of brute and conscious kindness he wanted to put together.”  –Chaim Koppelman, from “Power and Tenderness in Men and Picasso’s Minotauromachy”

“In two strikingly related works—a 19th century print and a 20th century sculpture, the artists looked at people one might easily have contempt for and instead had large respect. Honoré Daumier’s lithograph, Fruitless Search for the Planet, dates from the great French artist’s ‘Pastorals’ series of the mid-l840s in which he gently satirizes middle class Parisians on holiday….Tourists, by the American sculptor Duane Hanson, dates from 1970 and is now in the National Gallery at Edinburgh.” —from “Satire: Mockery and Compassion as One in Honoré Daumier & Duane Hanson”

Contents: 1. “Power and Tenderness in Men and Picasso’s Minotauromachy”; 2. “The Technique of Criticism in Edvard Munch”; 3. “Satire: Mockery and Compassion as One in Honoré Daumier & Duane Hanson”; 4. “Hogarth’s The Enraged Musician; or, What’s Wrong with an Ivory Tower?”

These essays were first presented at the Aesthetic Realism Foundation, and published in The Journal of the Print World from 1987 to 1992.

Public Events and Classes have been cancelled for March and April. Please see Coronavirus update on the homepage.